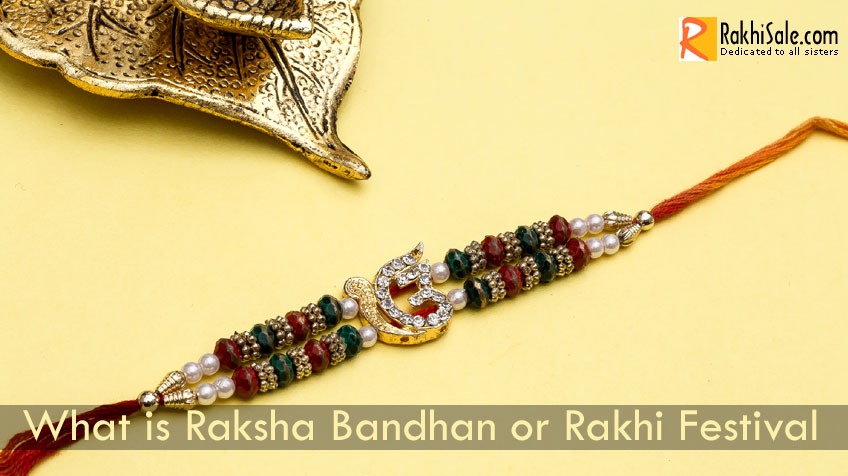 What is Raksha Bandhan or Rakhi Festival

India is a country of festivals. It is culturally so rich that it celebrates a festival almost every month. The people of India are so lively that they find a reason or the other for celebrations. One such reason is the sweet and sour relationship between a brother and a sister. Though brothers and sisters share and enjoy the bond of love between them throughout the year, Rakhi is the day when they get an opportunity to express their tender love and feelings towards each other. The Rakhi day is an opportunity for them to commemorate their loving memories, loyalty, closeness, trust, and friendship that is lasting and true.

Raksha Bandhan or 'Rakhi' is a special occasion to celebrate the bond by tying a holy thread around the wrist. This thread pulsates with sisterly love, and sublime sentiments are rightly called the 'Rakhi.' It means 'a bond of protection,' and Raksha Bandhan signifies that the strong must protect the weak from all that's evil. Various names know Raksha Bandhan: Vish Tarak - the destroyer of venom, Punya Pradayak - the bestower of boons, and Pap Nashak - the destroyer of sins.

Raksha Bandhan (the bond of protection in Hindi) is a Hindu festival which celebrates the relationship between brothers and sisters. It is celebrating on the full moon of the month of Shravana, and in 2021, it falls on August 22nd.

The festival is marked with the tying of a Rakhi or a holy thread by the sister on the wrist of her brother. The brother, in return, offers a gift to his sister and vows to look after her. The brother and sister traditionally feed each other sweets.

It is not necessary that the Rakhi can be given only to a brother by birth; any male can be "adopted" as a brother by tying a Rakhi on the person, whether they are cousins or a good friend. Indian history is replete with women asking for protection, through RakhiRakhi, from men who were neither their brothers nor Hindus themselves. Rani Karnavati of Chittor sent a Rakhi to the Mughal Emperor Humayun when Bahadur Shah of Mewar threatened her. Humayun abandoned an ongoing military campaign to ride to her rescue.

The Rakhi may also be tied on other special occasions to show solidarity and kinship (not necessarily only among brothers and sisters), as was done during the Indian independence movement.

For there is no friend like a brother
In calm or stormy weather;
To cheer one on the tedious way,
To fetch one if one goes astray,
To lift one if one totters down,
To strengthen while one stands.

Rakhi: The thread of love

Any Indian festival is incomplete without the typical Indian festivities, the gatherings, celebrations, exchange of sweets and gifts, lots of noise, singing, and dancing. Festivals are the celebration of togetherness, the celebrations of being one of the family. The Festival of Rakhi or Raksha Bandhan is one such significant occasion.
It is the celebration of brothers and sisters. It is one festival that primarily belongs to the North and Western regions of India but celebrated throughout the country with the same verve. Regional celebrations may be different, but Raksha Bandhan has become an integral part of those customs.

As per the traditions, the sister prepares the Pooja Thali with diya, roli, chawal, and Rakhis. She worships the deities, ties Rakhi to the brother(s), and wishes for their well being. The brother, in turn, acknowledges the love with a promise to be by the sisters' side through the thick and thin and gives her token gift.

The festival has been celebrating in the same way with the same traditions for centuries. Only the means have changed with the changing lifestyles. And this too to make the celebrations more elaborate.

This is the day that still pulls the siblings together. The increasing physical distances evoke the desire to be together even more. They try to reach out to each other on the Raksha Bandhan day. The joyous meeting, the rare family get-together that erstwhile feeling of brotherhood and sisterhood calls for a massive celebration.

The sisters tie that thread of love to their brothers amongst chanting of mantras, put roli and rice on his forehead, and pray for his well-being. She bestows him with gifts and blessings. The brother also wishes her a good life and pledges to take care of her. He gives her a return gift. The gift is the physical acceptance of her love, a reminder of their togetherness, and a symbol of his pledge. The legends and the reference in history are repeated; the significance of the festival is emphasized.

That is the kind of an end to the rituals, but the celebrations start after that. For the parents, it is a family reunion: tasty dishes, wonderful sweets, exchange of gifts, and sharing of past experiences.

For those who are not able to visit each other, Rakhi Products and e-Rakhis and Rakhis, through mails, perform the part of communicating the Rakhi messages. Hand made Rakhis and self-made Rakhi Products are just a representation of the personal feelings of the siblings.

The crux is that Raksha Bandhan brings people together in the true spirit of all Indian festivals.

The chaste bond of love between a brother and a sister is one of the deepest and noblest human emotions. 'Raksha Bandhan'' or 'Rakhi' is a special occasion to celebrate this emotional bonding by tying a holy thread around the wrist. This thread pulsates with sisterly love, and sublime sentiments are rightly called the ''Rakhi''. It means 'a bond of protection', and Raksha Bandhan signifies that the strong must protect the weak from all that's evil.

The ritual is observed on the full moon day of the Hindu month of Shravan, on which sisters tie the sacred Rakhi string on their brothers' right wrists and pray for their long life. Rakhis are ideally made of silk with gold and silver threads, beautifully crafted embroidered sequins, and studded with semi-precious stones.

What is Raksha bandhan? Social Binding:

This ritual not only strengthens the bond of love between brothers and sisters but also transcends the confines of the family. When a Rakhi is tied on the wrists of close friends and neighbours, it underscores the need for a harmonious social life, where every individual co-exist peacefully as brothers and sisters. All members of the community commit to protect each other and the society in such congregational Rakhi Utsavs, popularized by the Nobel laureate Bengali poet Rabindranath Tagore.

What is Raksha bandhan? The Friendly Knot:

It won't be wrong to say the fashionable friendship band in vogue today is an extension of the Rakhi custom. When a girl feels a friend of the opposite sex has developed a kind of love too strong for her to reciprocate, she sends the guy a Rakhi and turns the relationship into a sisterly one. This is one way of saying, "let's just friends", without hurting the other person's soft feelings for her.

What is Raksha bandhan? The Auspicious Full Moon:

In Northern India, Rakhi Purnima is also called Kajri Purnima or Kajri Navami, when wheat or barley is sown, and the goddess Bhagwati is worship. In Western states, the festival is called Nariyal Purnima or the Coconut Full Moon. In Southern India, Shravan Purnima is a momentous religious occasion, especially for the Brahmins.

The strong bond represented by Rakhi has resulted in innumerable political ties among kingdoms and the Princely States. The pages of Indian history testify that the Rajput and Maratha queens have sent Rakhis even to Mughal kings. The latter, despite their differences, have assuaged their Rakhi-sisters by offering help and protection at critical moments and honored the fraternal bond. Even matrimonial alliances have been established between kingdoms through the exchange of Rakhis.

History has it that the great Hindu King Porus refrained from striking Alexander, the Great, because the latter's wife had approached this mighty adversary and tied a Rakhi on his hand, before the battle, urging him not to hurt her husband.

There is no doubt that the rituals like Rakhi, help ease out various societal strains, induce fellow-feeling, open up channels of expression, allow us to rework on our role as human beings, and, most importantly, bring joy in our mundane lives.

"May all be happy
May all be free from ills
May all behold only the good
May none be in distress."

It is always the idea of an ideal Hindu society.