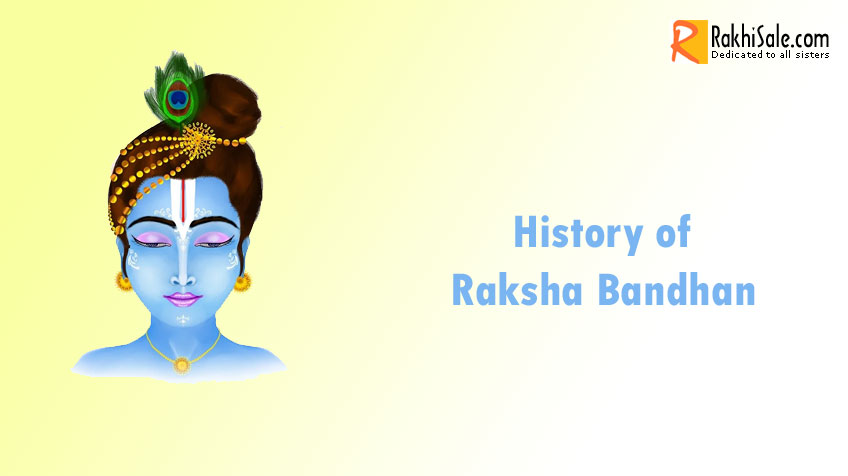 Raksha Bandhan is being celebrated in India since ages. Read on to know more about the history and origin of the Rakhi festival.

Hindu scriptures and mythology is the source of all the Hindu rituals and festivals. One can find explanations for all the Hindu traditions and customs in the religious Hindu Epics. Therefore, the origin of Rakhi celebrations is also rooted in Hindu mythology.

There is no confirmed date and time available about the history of the Rakhi festival, but the story goes as follows.

In the Vedic period, on a 'Shravan Poornima' day (Full Moon Day of the Hindu month of Shravan), the deities and the demons fought a battle against each other. Unfortunately, the demons were in a stronger position as compared to the Gods. The King of the deities, Lord Indra, was very much worried about the result of the battle. His wife Indrani (also known as Shashikala) could not see him anxious and prayed to the almighty. Indrani was a religious lady, so she prepared a Talisman with her spiritual power and tied it around Indra's right wrist. She believed that this Talisman would safeguard Indra from the attack made by the demons. She was right about her belief as that day, the deities won the battle, and Lord Indra escaped unhurt.

The origin of the festival is mostly attributed to one of the following mythological incidents:

One of the earliest origins of Raksha Bandhan in documented history can be traced to the medieval era. During this period, the Rajputs were fighting Muslim invasions. Rakhi, at that time, was a spiritual symbol associated with the protection of the sister. History has it that when Queen Karnawati, the widow of the then King of Chittor, realized that she could in no way defend the invasion of the Sultan of Gujarat, Bahadur Shah, she sent a Rakhi to Emperor Humayun. The Emperor touched by the gesture, accepted the Rakhi, thereby taking Queen Karnawati as a "sister" and immediately started with his vast troops to protect Queen Karnavati.

Alexander and The Great King Puru:

One of the oldest legendary references to the festival of Rakhi goes back to 300 B.C. At this time, Alexander was invading India. Alexander was shaken by the fury of the Indian King Puru in his first attempt. Upset by this, Alexander's wife, who had heard of the Rakhi festival, approached The Great King Puru. King Puru accepted her as his sister, and when the opportunity came during the war, he refrained from fighting Alexander. In the war, when Alexander fell from his chariot and King Puru was about to slay him, King Puru saw the Rakhi on his wrist, and he drew his sword back!

The History of Raksha Bandhan:

There are many references to the significance of the Rakhi festival in Vaishnava Theology.

According to legend, the Demon King Bali was a great devotee of Lord Vishnu. Lord Vishnu had taken up the task to guard his kingdom, leaving his abode in Vaikunth. Goddess Lakshmi wished to be with her Lord back in her home. She went to Bali disguised as a Brahmin woman to seek refuge until her husband came back.

During the Shravan Purnima celebrations, Lakshmi tied the sacred thread to the King. Upon being asked, she revealed who she was and why she was there. The King was touched by her goodwill for his family and her purpose and requested the Lord accompany her. He sacrificed all he had for the Lord and his devoted wife.

Thus the festival is also called Baleva that is Bali Raja's devotion to the Lord. It is said that since then, it has been a tradition to invite sisters in Shravan Purnima for the thread tying ceremony or the Raksha Bandhan.

Yama and the Yamuna:

According to another legend, Raksha Bandhan was a ritual followed by Lord Yama (the Lord of Death) and his sister the Yamuna. The Yamuna tied Rakhi to Yama and bestowed immortality. Yama was so moved by the serenity of the occasion that he declared whoever gets a Rakhi tied from his sister and promised her protection would become immortal.

During the medieval era, Rajputs were fighting Muslim invasions. Rakhi, at that time, meant a spiritual binding and protection of sisters was foremost. A famous incident relates to how Rakhi by then had broken the religious barriers.

When Rani Karnawati, the widowed queen of the King of Chittor, realized that she could in no way defend the invasion of the Sultan of Gujarat, Bahadur Shah, she sent a Rakhi to Emperor Humayun. The Emperor, touched by the gesture, started with his troops without wasting any time.

Alexander The Great and King Puru :

The oldest reference to the festival of Rakhi goes back to 300 B.C. at the time when Alexander invaded India. It is said that the great conqueror, King Alexander of Macedonia, was shaken by the fury of the Indian King Puru in his first attempt. Upset by this, Alexander's wife, who had heard of the Rakhi festival, approached King Puru. King Puru accepted her as his sister, and when the opportunity came during the war, he refrained from Alexander.

There are many legends associated with the Indian festival of Rakhi. Different heroes in Indian mythology and history with whom Rakhis are associated are:

Indra: According to legend, Indra found himself being defeated by the demon king or Daitya Raja. On the advice of his Guru Brihaspati, his consort tied a Raksha on Indra's wrist, and this helped him achieve victory against the demon king.

Yudhishtra: The eldest of the Pandavas are believed to have asked Krishna how to protect himself, the epic battle of the Mahabharata. Lord Krishna instructed him that the beneficial power of the Rakhi would defend him.

Alexander: When Alexander invaded the Indian subcontinent in 326 B.C., he had to fight many battles against the rulers of kingdoms in the North West. Alexander's wife is believed to have tied a Rakhi to the King Puru or Porus. In return, he is believed to have promised to protect her and her husband. In battle, when he had the opportunity to strike Alexander, his promise is believed to have restrained him from delivering a fatal blow.

Humayun: During Mughal times, the custom of tying Rakhis helped bind the Hindu Rajputs and the Mughal rulers of Delhi together. According to legend, when Bahadur Shah of Gujarat attacked Rani Karnavati of Chittor, she sent a Rakhi to Humayun and requested him to help. He tried to come to her aid but was too late, Chittor had already fallen, and the Rani had immolated herself in the Rajput custom of Jauhar.

In present-day times, women have used the tradition of Rakhi as a way of deflecting unwanted attention, and some women politicians have maintained political relationships with other leaders by tying Rakhis on them. The different ways in which the custom of Rakhi is followed today shows the continued relevance of Raksha Bandhan in today's world.